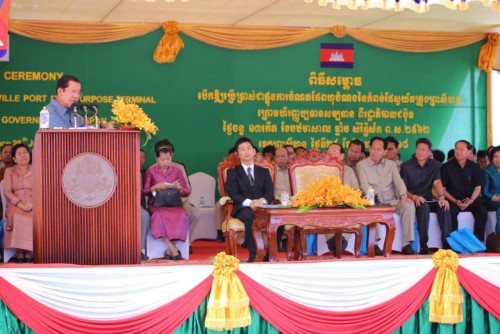 Cambodian Prime Minister Hun Sen wished Japanese football team to get selected as one of the 16 teams in FIFA World Cup 2018 hosted by Russia, speaking at the inauguration ceremony for the official use of the $74 million Sihanoukville autonomous port multipurpose terminal on Monday.

“I supported Japan since the beginning of the tournament. Asia supports Asia,” he added.

He expects that Japan’s Samurai Blue will beat Poland in the third round of group “H” in Volgograd on June 28.

The premier called for Cambodians not to bet money, as some people already committed suicide losing the bet.

Japan is the only hope for Asia to qualify for the 2018 World Cup among the five Asian teams representing Asia, while the other two are Iran and Australia, with little hope, and two other teams have been eliminated, including Saudi Arabia and South Korea.