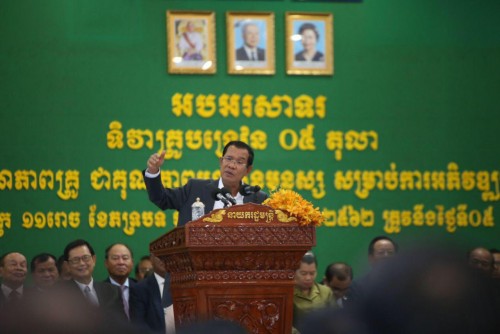 Cambodian Prime Minister Hun Sen announced that garment worker’s minimum wage in 2019 will be above $180, addressing on Friday at the commemoration of World Teachers’ Day 2018, held in Phnom Penh.

Factory owners already approved $177 as minimum wage; however, the premier has yet satisfied. The government will negotiate with factory owners to pay higher. In return, the factory asked the government to reduce electricity price.

Som Oun, a member of the trilateral working group for minimum wage negotiations, told Fresh News that the minimum wage for workers in 2019 will be officially decided by Friday afternoon.

Oun pointed out that trade unions have always wanted higher salaries, but they also think about competitiveness with other countries in the region to maintain investment and job security.

While Cambodia offers a minimum wage of about $170, Vietnam only offers $120 compared to only $110 in Indonesia and Laos.

He added that 20 years of peace provided Cambodia with the opportunity to drive economic growth in circle of 7 percent per annum, compared to Vietnam at 6.8 percent, according to a report issued by World Bank on 4 October 2018.