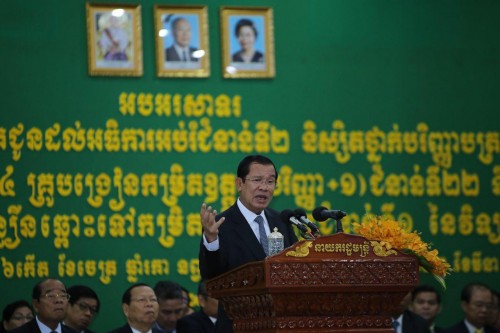 Addressing to 1,630 teaching graduates in Phnom Penh on Thursday, Prime Minister Hun Sen said that the wars in Cambodia had destroyed the root of education, which no countries in the world experienced. Wars in other places in the world did not undermine the foundation of education like in Cambodia, which is easier to restore after founding peace.

Cambodia has been in fierce war since the late 1960s until the late 1990s. The three-decade war has degraded every sector, including education. Particularly, in the Pol Pot Genocidal Regime, for over 3 years, 8 months and 20 days, it was the time when the education sector was abolished; schools became prisons or killing fields; and that many professors were murdered.

Prime Minister looked back at the difficult situation of Cambodia in recovering education sector after liberating from the genocidal regime on January 7, 1979 by the policy that the more educated taught the less educated and the less taught the non-educated.

“I traveled to a lot of countries while working as a foreign minister. In the aftermath and independence, those countries continued to build on physical and non-physical infrastructure. However, for us, we have nothing after Pol Pot. It is difficult to recover from zero, but we are very proud for our effort and it becomes our pride for our nation. ”

The premier reiterated that the win-win policy not only focused on administration reform, but also integration on other sectors, including education. He recalled that the regions which used to be battlefields with difficult roads and no schools have been transformed to good infrastructure and schools for students to study like in other provinces.

He considered those achievements as a great success resulted from the joint effort between the Royal Government and the whole Cambodian people.

He highlighted that Cambodia currently has about 3 million students and nearly 120,000 teachers. Teachers and education officials trained at the National Institute of Education have been actively involved in improving the quality of education and training children and the people of Cambodia.

With the continued improvement of the education sector, Prime Minister Hun Sen reminded that only peace plays a crucially important role.