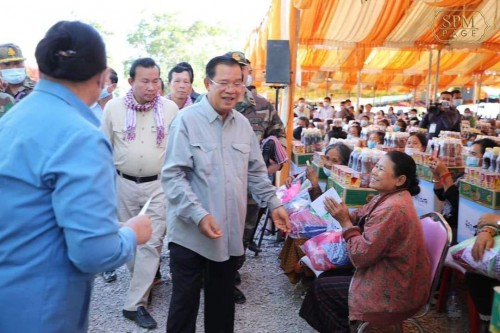 Speaking during his visits to flood-affected areas in Banteay Meanchey’s Poipet City on Thursday morning, Cambodian Prime Minister Hun Sen once again said “if you want inner peace, do not commit crimes”.
His statement was made after the opposition group have repeatedly claimed that Cambodia has only external peace, but no inner peace.
“Those who commit illegal acts feel insecure, thus no peace of mind,” he underlined.
Samdech Hun Sen added that when a person makes a mistake, there is no inner peace, whether it is a mistake against the state, religion or family.
“It is true that we are suffering from flooding and COVID19, but the fact is that there is no war that requires every house to have bunker,” said the premier.
Since the successful implementation of win-win policy in 1998, peace, political stability, and social order have been strengthened and paved ways for socio-economic development.