US Holdings of Cambodian Debt in Lon Nol Regime Is Dirty, Forcing Cambodia to Buy Bombs and Drop on Her People: PM Hun Sen 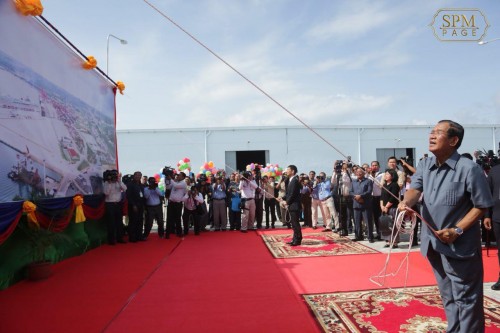 Cambodian Prime Minister Hun Sen considered “US holding Cambodian debt in Lon Nol Regime in 1970” a dirty debt that forced Cambodia to buy US bombs and showered on her people, causing countless deaths and injuries of Khmer people, Thinking about it, it was extremely painful for every Cambodian citizen, he said.

The statement was made at the inauguration for the official use of the $74 million Sihanoukville autonomous port’s multipurpose terminal on Monday.

The United States supported and provided loans to Lon Nol to illegally overthrow King Father Norodom Sihanouk in 1970. Some documents indicated that the loan was initially about $270 million, but it has now amounted to more than $600 million including the interest.

“It was painful that we were forced to buy their bombs and drop on our heads. They demand us to pay the debt. They continue to charge us with the interest, while the negotiation has yet reached,” the premier said.

The Cambodian government has requested the United States to turn this debt into development aid, as Lon Nol’s coup caused serious devastation, killed and injured millions of Cambodians. Unfortunately, the US rejected the proposal.

“The Americans said it was hard to explain their Congress the debt issue, but I told them that it is even harder for me to explain to my National Assembly. You shall understand that His Majesty is the son to the former King whom Lon Nol toppled; that the coup have created an illegitimate government and so led to borrowing from the US,” stated the premier.

“Lon Nol’s debt has been considered as a dirty debt. I told Trump in the ASEAN Summit that it seems like the U.S used a hammer to beat us and want us to pay for the hammer,” he added.

According to Cambodian Mine Action Center (CMAC)’s report, US dropped approximately 2.8 million tons of bombs around Koki areas during the 1960s and 1970s, killing more than 500,000 people.

US bombs has threatened the lives of Cambodians as many chemical bombs were found in Svay Rieng, Mondulkiri and Tbong Khmum provinces.