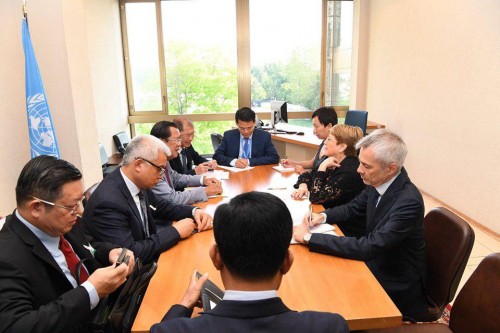 UN High Commissioner for Human Rights Michelle Machelet recognized that Prime Minister Hun Sen, as the leader of Cambodia, has made progress in Cambodia’s socio-economy.
The statement was made in a meeting with Cambodian delegation headed by Prime Minister Hun Sen on Thursday on the sidelines of the 41st Universal Periodic Review on Human Rights at the United Nations Office in Geneva.
Both sides discussed mainly on human rights issues in Cambodia.
Prime Minister stressed that there are many fake news attacking on human rights in Cambodia, but the kingdom still put efforts to adhering to democracy and promoting human rights.
“During the Khmer Rouge era, people had no rights at all. On the contrary, for today, Cambodian people possess absolute rights,” the premier stated.
He continued that the government puts a lot of efforts to promote human rights in Cambodia, particularly assist women by creating a voluntary lawyer group to provide free legal consultation, and other social protection systems, as well as promoting the budget for Ministry of Women’s Affairs.
Prime Minister informed the UN High Commissioner for Human Rights that he welcomes the talk on human rights issues in Cambodia, and offered the high commissioner the renewal of two-year terms of OHCHR in Cambodia.
Michelle Machelet accepted the premier’s invitation to visit Cambodia in a timely manner.