Uncle Sam Is Mad When Russia Interferes in His Affairs, yet He Meddles in Cambodian Affairs: PM Hun Sen 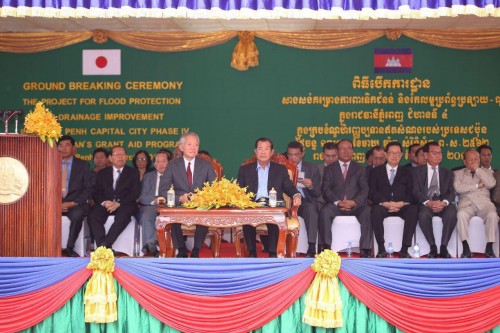 Cambodian Prime Minister Hun Sen, on Monday, announced to protect Cambodian people from any interferences, speaking at the Phnom Penh flood protection and drainage improvement project groundbreaking ceremony under the Japanese aids, which the Premier co-chaired with Japanese Ambassador to Cambodia Horinouchi Hidehisa.

“Even you yourself [US] complain when Russia meddles in your affairs, why can’t you just embrace mutual respect with Cambodia,” the Premier questioned.

“The only think I ask is the happiness of my people. They suffer enough; I don’t even want them to be jailed,” he underlined.

The US is widely seen to support the opposition party in Cambodia. The US has subsequently released statement to attack the Royal Government after the Supreme Court dissolved the opposition Cambodia National Rescue Party and arrested its leader Kem Sokha after he confessed that he, under the US’s command, aimed to the topple the legitimate government by taking the model from Yugoslavia and Serbia.

“Every country counters against the interferences, why Cambodia, as a sovereign nation, can not,” the Strongman stated.

He also questioned why the US did not treat Cambodia well like Thailand and Myanmar, who are less democratic than Cambodia.

According to the Premier, the bloc of appointed military legislators holds 25 per cent of the seats in Myanmar’s parliament, whereas in Thailand, her newest constitution allows military to nominate legislators to be Prime Minister despite losing the election.