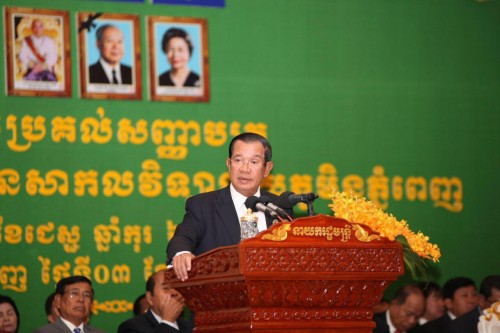 Cambodian Prime Minister Hun Sen expressed confidence that the Democratic Republic of Timor-Leste is capable to become member of the Association of Southeast Asian Nations (ASEAN), speaking Monday at the Royal University of Phnom Penh graduation ceremony at Koh Pich.
By the end of 2019, ASEAN will send a Fact Finding Mission team to examine Timor-Leste, according to the Premier.
“I have visited Timor-Leste. Timor-Leste has the capacity to become ASEAN member. We should not overlook Timor who is building human resource like us,” the Premier stated.
“The gap between the old and the new ASEAN members have reduced. When Timor entered ASEAN, I will urge ASEAN leaders not to separate ASEAN into three: old ASEAN, new ASEAN, and ASEAN Timor-Leste.”
Timor-Leste became the first new sovereign state on 20 May 2002 and joined the United Nations. In 2011, East Timor announced its intention to be ASEAN member. Cambodia has supported Timor-Leste to become the 11th member of the ASEAN.
H.E Dionisio da Costa Babo Soares, Minister of Foreign Affairs and Cooperation of the Democratic Republic of Timor-Leste is conducting an official visit to the Kingdom of Cambodia from 3-4 June 2019 at the invitation of Cambodian Minister of Foreign Affairs and International Cooperation Prak Sokhonn.
During the visit, H.E. Foreign Minister is expected to pay separate courtesy calls on Prime Minister Hun Sen and other leaders of the Kingdom of Cambodia. Following these calls, he will hold bilateral meeting with Minister Prak Sokhonn to discuss areas of cooperation to strengthen friendly relations between the two countries as well as exchange views on regional and international issues of common interest, including matter regarding Timor-Leste’s application for a membership in ASEAN.