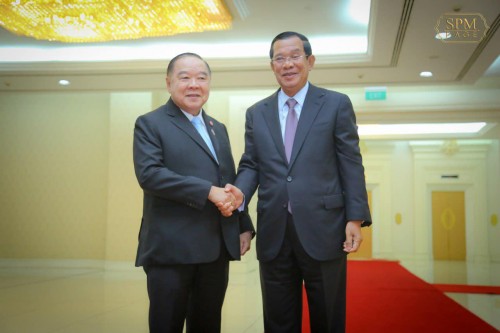 Eang Sophalleth, personal secretary to the premier, told the press that today’s meeting aims to strengthen and promote cooperation between the two countries in safeguarding peace, stability, cooperation and development of Cambodia-Thailand border.

Cambodia and Thailand pledged to upgrade the four border gates and open new checkpoints to boost bilateral trade and tourism along the border, aiming to increase trade alone to $15 billion over the next five years.

The two countries’ bilateral trade volume reached $6.1 billion by 2017. Both also agreed to balance the import and export of goods between the two nations.

Prawit highly commended Prime Minister’s win-win policy and his visit to the memorial. The defense minister was impressed that Cambodian strongman’s quest to pursue peace for the kingdom started with only five comrades.

Prime Minister, in response, informed Prawit that the memorial also serves as the archives of liberation process of Cambodia from the bloody genocidal regime Pol Pot; it also features documents writing about heroes who contributed to the peace process.

The GBC was held annually under the rotation of chairmanship since the signing of 2006 agreement between the Royal Government of Cambodia and Thailand.

GBC, according to the premier, plays an important role in promoting border peace and development, particularly cementing the bonds of Cambodian and Thai people.