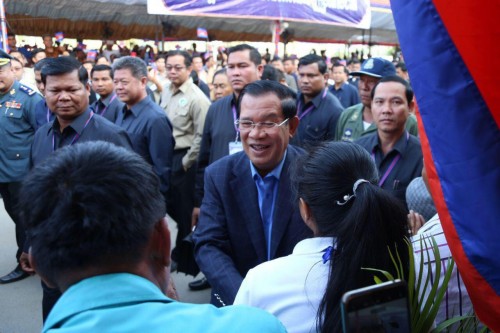 Cambodian Prime Minister Hun Sen said that the construction of the 34-line roads in Sihanoukville marks a new era of infrastructure in Cambodia, and upon completion, the coastal city will attract many tourists and serves as multi-purposes city.
The statement was made at the inauguration of road construction in Sihanoukville on 16 November 2019.
As most roads in Sihanoukville are inaccessible, the Royal Government of Cambodia begins the infrastructure reconstruction to meet the needs of the potential coastal city, starting from rehabilitating and building 38 lines of roads, costing the USD 294 million to be completed within eight months.
“Sihanoukville is considered a multi-purposes city, comprises of transportation routes, deep-water port, industries and services […] Security cameras will be installed on both sides of the road to ensure that the city is a safe to host the local and foreign tourists”, Prime Minister underlined.
Sihanoukville Governor Kouch Chamroeun said the 34 lines of roads, which opens construction today on 16 November 2019, are more than 84 kilometres long. It comprises of three roundabouts and six bridges.
“The constructions will further boost transportation and tourism sectors in Sihanoukville,” he said.
According to the premier, Sihanoukville is home to 229 five-storey buildings, and that the other 800 of five-storey buildings are being constructed. The coastal city has attracted USD 1 billion capital investment on construction sector per annum in the last two years.
As of November 2019, Sihanoukville, approximately 230 km from the capital Phnom Penh, has received about 1.94 million tourists, an increase of 10 percent. Among those, 1.2 million are national visitors, down 6 percent, and 730,000 are international visitors, up 58 percent.