Samdech Techo: “Short of Money but Full Heart” in Helping Others 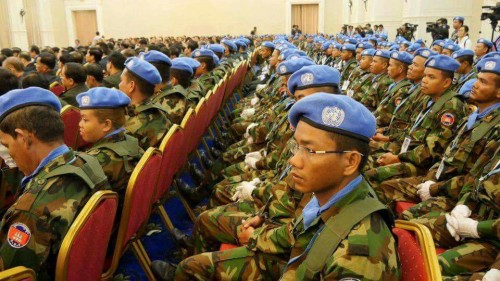 In the afternoon of 1 March 2016, closing the ceremony to commemorate the ten -year achievements of the Cambodian troops deployment to the United Nations peacekeeping missions in the Peace Palace, Samdech Techo Hun Sen recalled Cambodia’s ambition in expanding its peacekeeping troops to foreign countries should there be request from the United Nations. Samdech Techi emphasized “I have an ambition. Friends helped us. We also helped friends. Though Cambodia is short of money but Cambodia is not short of heart … and should Cambodia become an economically rich country, Cambodia would provide external assistance up to 0.7% of its GDP. This is my ambition.”

Samdech Techo also reminded his two difficult decisions – firstly, to accept the operation of the UN Transitional Authority in Cambodia (UNTAC) while Cambodia was in a period of conflict and peace negotiation and, secondly, to send, despite its internal difficulty, troops to foreign countries (for UN peacekeeping operations). “The two decisions were correct and proud ones,” he said.

Samdech Techo praised the Cambodian troops deployed to foreign countries for saving Cambodia’s honor and that was contrary to the presence of UNTAC troop that brought HIV/AIDS and left hybrids in Cambodia in time of its operation. Samdech Techo also advised Cambodian blue-beret troops to expand knowledge, especially foreign languages, to respect rules, customs and take recommendation and order seriously, to continue making good relations with people in area of operation, and take extra precaution for all sorts of accidents, while helping each other./.