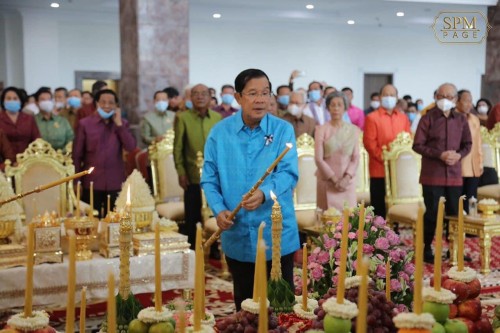 Samdech Akka Moha Sena Padei Techo Hun Sen, Prime Minister, President of the ruling Cambodian People’s Party (CPP), has noted the party’s achievements in the last 41 years.
In his message on the CPP’s 69th founding anniversary (June 28, 1951-2020), Samdech Techo Hun Sen said during the past 41 years, CPP has led the country in overcoming countless obstacles and attaining many big historical achievements since the national salvation from the Khmer Rouge genocidal regime to the full peace, national unity and current development.
Samdech Techo Hun Sen recalled the party’s history and ideals as well as mission in building an independent, peaceful, democratic, and neutral Cambodia with freedom and social progress.
Each year, he continued, the party’s founding anniversary is celebrated solemnly with the participation of the party members at all levels, but this year the commemoration was postponed in order to garner efforts to deal with the impacts caused by COVID-19 pandemic.
The CPP president took the opportunity to appeal to all his party members and his compatriots to strictly follow the instructions of the Royal Government and the Ministry of Health in order to avoid the spread of COVID-19 from one individual to another and in the community, and to maintain the normalisation of the people’s daily life and productivity.
Samdech Techo Hun Sen also expressed his conviction that with the people’s active participation, Cambodia will win the battle against COVID-19.