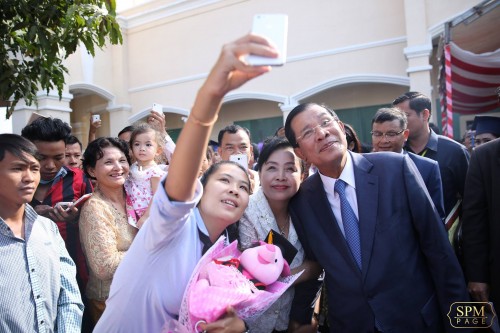 In the ceremony on 5 February 2016 to confer diploma for graduates of the National University of Management (NUM), while greeting progress made by NUM as well as efforts of graduates, Samdech Techo Hun Sen urged further deep reform of education. Samdech emphasized that adapting to changes in region and world requires competition that human resource has become key in process of integration in sub-regional, regional and world levels. Relating to regional and world affairs, Samdech Techo stressed that that the United States of America sent its Secretary of State to Cambodia before opening of the US-ASEAN meeting clarified that Cambodia is being treated as a country and a sovereign state. In response to criticism made by some young analysts about Cambodia’s sovereignty so far, Samdech Techo reaffirmed that Cambodia is a sovereign state. It was not necessary for Cambodia to seek advice with any country at all. Should there not be independent policy, Cambodia would not have climbed out its dangerous past and made way through its win-win policy. Samdech Techo clarified that “there is no need for Cambodia to report to anyone about how it works with the US, China, or Japan … Cambodia is Cambodia. No one knows Cambodia better and clearer than Cambodians, and only the Cambodians can decide its fate.” Referring to the recent meeting with John Kerry, the US Secretary of State, on South China Sea issue, Samdech Techo made a point to that (the United States of) America should give justice back to him and to Cambodia. Responding to John Kerry’s remark that his presence did not mean for Cambodia to choose between the US and China, Samdech Techo reciprocated that Cambodia has no need to choose who versus who. Cambodia needs only friends. While making his point that Cambodia would benefit nothing should it choose one country versus the other, Samdech Techo told the US Secretary of State that it is about time that “I should be given justice for my role in 2012 on issue of South China Sea. It should be aware that I was disappointed when they said that Cambodia’s closeness to China was the cause of not achieving COC (Code of Conduct) in South China Sea. Samdech argued that while previous rotating chairs of ASEAN before and after Cambodia could not realize COC, would it be time for those who attack Cambodia come forward and apologize? They should pay back my justice and cleanness./.