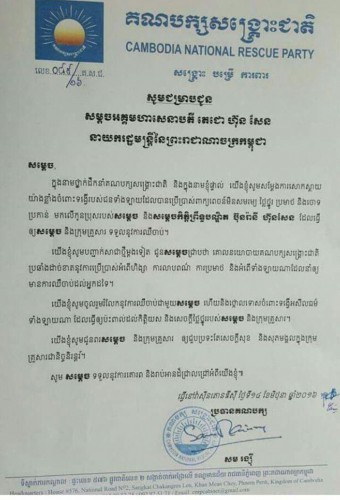 The official emphasized that what were stated in Mr. Sam Rainsy’s letter were just for political gains since the truth is that the Cambodian National Rescue Party is a party that tends to resort to violence, coloring, humiliating and attacking other parties and people; a stark contrast to the content in the letter.

In the meantime, a senior CNRP official who is close to Mr. Sam Rainsy and claimed to have heard of the conversation with his own ears, disclosed to Fresh News this afternoon that actually Mr. Sam Rainsy was saying it straight forward in a meeting ordering his activist Brady Young (Facebook name) to attack, defame and humiliate the premier’s wife and son. He then pretends to send a letter expressing regret over the acts./.