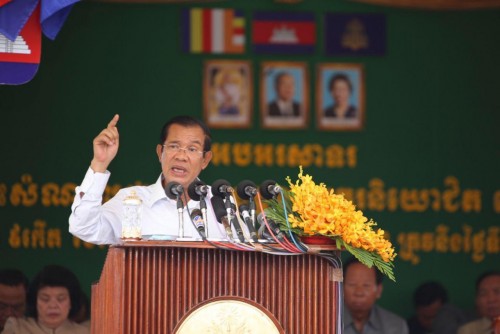 Cambodian Prime Minister Hun Sen said Wednesday that Sam Rainsy, leader of Cambodia National Rescue Movement, will be “defeated” in a political battle on the part that he appeals people not to vote in the upcoming election on July 29, 2018.

The premier made the remarks at his meeting with nearly 20,000 workers from 17 factories in Chbar Mon City, Kampong Speu Province.

Recently, Rainsy called for Cambodian voters to boycott the National Assembly 6th mandate election on July 29. Rainsy is of the view that CRNP would win the election if the majority of Cambodian voters will boycott it, and the same fate as that happened in recent election in Venezuela.

“Venezuela: Success of the opposition’s call for election boycott (53% of potential voters did not go to vote last Sunday),” Rainsy wrote on Facebook on Tuesday.

The premier also called Rainsy a weak leader, saying a good commander does not and never orders from abroad.

“To command, a commander shall stay near the soldiers. Commanding through Facebook does not work,” the premier advised.

“The lower number of voters from opposition party, the better for CPP”, added the premier.