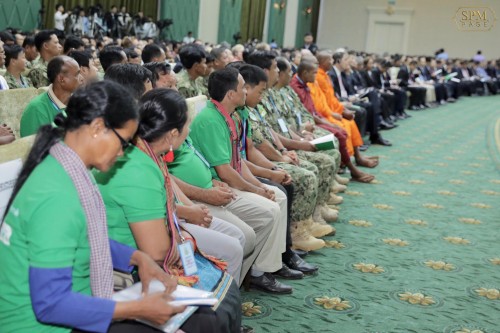 Cambodia’s Prime Minister Samdech Akka Moha Sena Padei Techo Hun Sen has asked all the state institutions to cut down new recruitment in 2018 and encouraged them to use their existing staff effectively.
Addressing to the 2nd National Forum on “Protection and Conservation of Natural Resources” organised at the Peace Palace, Phnom Penh this morning, Samdech Techo Hun Sen expressed his concern over the royal government’s expenditure on the administration costs.
The royal government now spends more than 50 percent of the current expenditure or 6 percent of GDP on staff costs, while it should be only 40 percent of the current expenditure or 4 percent of GDP as stated in the country’s macroeconomic management policy, he said.
In 2016, Cambodia employed some 206,000 civil servants, 40 percent of them are women, according to the figures from the Ministry of Civil Service.