Here followed is a complete unofficial translation of the review and comments of Samdech Techo Hun Sen on the historical process of finding peace in Cambodia in commemoration of the 24th anniversary of the Paris Peace Agreement.

In a few days from today, the commemoration of the 24th anniversary of the Paris Peace Agreement (23 October 1991 – 23 October 2015) will arrive. Please allow me to remind some historical processes relating to peace finding in Cambodia.

Understanding that continuing war would only prolong people’s sufferings and in the aim of searching for peace and national reconciliation, the Cambodian People’s Party and I, as well as the then Government, had made heinous efforts to seek for a political solution. To achieve the goal, there was a necessity for conducting negotiation.

In 1984, when I was Deputy Prime Minister and Minister of Foreign Affair, there was an attempt to arrange a meeting between Samdech Preah Norodom Sihanouk and me in Paris, France by then French Foreign Minister. However, the attempt failed because of the fact that some countries and the Khmer Rouge opposed to it.

Despites many difficulties because of oppositions from some countries, the Khmer Rouge and KPNLF (Khmer People’s National Liberation Front), Samdech Preah Norodom Sihanouk had decided to conduct negotiation with me. The first negotiation started on 2 December 1987 in Fere-en-Tardenois, France, which put out a joint communiqué undersigned by Samdech Preah Norodom Sihanouk and me (the meeting and negotiation Sihanouk-Hun Sen in Fere-en-Tardenois from 02 to 04 December 1987). The second negotiation between Sihanouk and Hun Sen conducted from 20 to 21 January 1988 in Saint-Germain-en-Laye, France.

Stemming from the two opening Sihanouk and Hun Sen negotiations, the current of searching for political solution in Cambodia expanded. Forum of negotiations among the various Cambodian factions – such as JIM I, JIM II, IMC, etc., with participations from a number of countries had ushered in July and August 1989 but without any successes. I then had to find other means to work with Samdech Preah Norodom Sihanouk through the setting up of the Supreme National Council (SNC), which could be broken down into three stages:

Stage 1 – the signing of agreement between Samdech Preah Norodom Sihanouk and me on 21 February 1990, Bangkok, Thailand.

Stage 3 – Between 9 and 10 September 1990, in Jakarta, Indonesia, there was this effort to list members of the Supreme National Council, for which Samdech Preah Norodom Sihanouk did not attend the Jakarta meeting on behalf of Funcinpec and was replaced by Samdech Chao Sen Kosal.

The meeting of the Supreme National Council conducted between 16 and 17 September 1990 in the Cambodian Embassy in Bangkok but failed to produce any result at all. There had been helps from the big five or permanent members of the Security Council of the United Nations to put out a draft agreement on political solution to the Cambodian problem but the process did not go forward.

The secret broke out in Bangkok, Thailand. It was a huge political pressure for the Khmer Rouge and foreigners. In order for Samdech Preah Norodom Sihanouk not to return to Cambodia out of political solution, a number of countries had sought every means to prevent (his return) by instating Samdech Preah Norodom Sihanouk as a member of the Supreme National Council in replacement of Samdech Chao Sen Kosal. It was from then that everything worked and moved fast. On 24 through to 26 June 1991, the Supreme National Council convened a meeting in Pattaya, Thailand under the leadership of Samdech Preah Norodom Sihanouk, who acted as Chairman of the meeting but not as President of the Supreme National Council. Khieu Samphan softened his stance, agreed to a ceasefire and stopped receiving foreign military assistance. It was the first softening position from this stubborn faction.

On 16 July 1991, the Supreme National Council met in Beijing, People’s Republic of China. I had a secret meeting with Samdech Preah Norodom Sihanouk and offered him the role of President of the Supreme National Council, for which Samdech Preah Norodom Sihanouk and I had signed a joint communiqué that I drafted and he agreed to it (please find enclosed the joint communiqué attached).

Everything was good. The meeting of the Supreme National Council plus the big five (permanent members of the Security Council) and co-chairmen of the Paris Conference, France and Indonesia, as well as the Special Representative of the Secretary General of the United Nations, continued from 26 through to 30 August 1991 in Pattaya, Thailand.

There were three major points in the final part of the negotiation:

Firstly, (it was the issue of) ceasefire and demobilization of troops. For ceasefire, we had agreed to a ceasefire and maintain status quo. The difficult part was the demobilization of troops. The tripartite coalition represented by Khieu Samphan proposed for each faction to keep the number of troop at 2,000. According to this formula, the tripartite coalition would keep in total a troop of 6,000 men, while according to then estimate all three factions had less than 40,000 men in their forces and controlled less than 10% of the territory. The State of Cambodia had over 140,000 men in its forces and controlled over 90% of the territory and, according to this formula, would have to keep only 2,000 men as other faction.

As expected, at the opening of the meeting Samdech Preah Norodom Sihanouk told the meeting that the big five wished that all Cambodian factions demobilized 70% of their troops. I declared my support immediately. Khieu Samphan, Son Sann and Prince Norodom Ranariddh followed suit to declare their supports.

Hence, the topic of ceasefire and troops demobilizations were resolved in Pattaya, Thailand.

Second was the issue of voting system. In the draft by the big five, they proposed proportional representation system for the whole country while the State of Cambodia proposed the first-past-the-post voting system. The issue was not resolved in Pattaya. I came back to discuss this issue with other leaders in the country. We then propose a proportional representation system by provincial constituency and all factions had agreed to it in New York at the general assembly of the United Nations from 14 through to 21 September 1991. The system has been in use for elections of members of the National Assembly until present.

Third was final decision right. The agreement had been drafted to give head of transitional authority or UNTAC the right to give final decision. I, representing the State of Cambodia faction, wished to give that right to Samdech Preah Norodom Sihanouk in his capacity as President of the SNC. The issue was not resolved in Pattaya too but was resolved at the UN headquarters. I felt myself in an awkward position when I discovered on the table a message of Samdech Preah Norodom Sihanouk to the UN Secretary General HE Javier Perez de Cuellar saying – “the right to give final decision rested with President of the SNC or UNTAC head would depend on Samdech Hun Sen to decide.” I had no other choice but agreed to it. Everything was resolved when SNC occupied the UN seat in September 1991, the approval of the date of 21 October 1991 for the signing of the Paris Peace Agreement in Paris was also included.

As mentioned, the process of searching for peace was difficult but better than continuing war. We had gone through the stage of a complete war, the stage of intervolving between fighting and negotiation to the stage of complete peace. What the Paris Peace Agreement wished to achieved but UNTAC failed to do had left Cambodia with two ruling zones and governments. The final choice for a complete peace in Cambodia was to put out and implement the win-win policy, which had gained success from 1996 through to 1998. This is peace that has been achieved by Cambodians jointly. There were no winners or losers. It brings about national and territorial unity for the first time in a history of more than 500 years that Cambodia has become a country of one rule, one Constitution, one King, one Royal Government, one army and without division. We must keep uniting to maintain peace./. 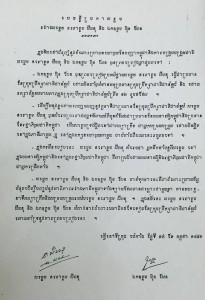 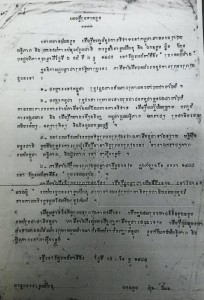 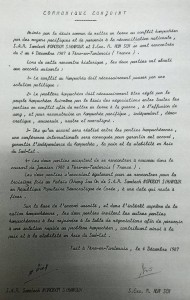