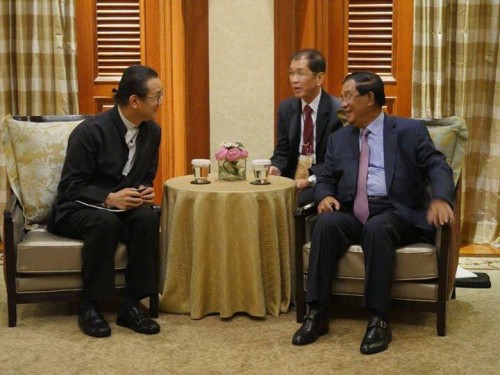 In the meeting, Mr. Vikrom Kromadit informed Samdech Techo Hun Sen of his company’s intention to establish a special economic zone (SEZ) in Cambodia, after its success in Thailand, Vietnam and Myanmar. He thus sought the Cambodian premier’s recommendation to this investment plan.

For his part, Samdech Techo Hun Sen reaffirmed Cambodia’s efforts to maintain the annual economic growth at around 7 percent on average. Besides, he added, the country has been doing her best to minimise obstacles to investment, including electricity prices.

Samdech Techo Prime Minister welcomed the company’s intention to create a SEZ in Cambodia and pledged to preside over the inauguration of the Amata Corporation PCL’s upcoming SEZ in Cambodia.