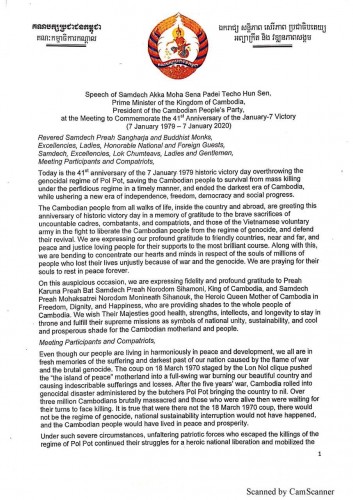 On the occasion of the 41st Anniversary of January 7 Victory Day, Prime Minister Hun Sen, president of the Cambodian People’s Party (CPP) delivered remarks before tens of thousands of supporters gathered at the center of Koh Pich on 7 January 2020.
In his speech, the premier mentioned the overthrow of Pol Pot genocidal regime and saved Cambodian people from the regime’s massacres, ending the darkest page of Cambodia’s history and beginning a new era of independence, freedom, democracy and social progress.
Premier Hun Sen also highlighted Cambodia’s achievement over the past 41 years and expressed his vision to steer Cambodia towards development and prosperity.