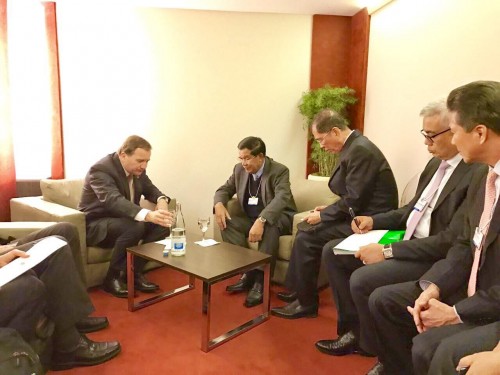 Cambodian Prime Minister Hun Sen made some requests including rice exports, to Prime Minister of Sweden which aims to bring mutual benefits for both countries.

The requests were made during the bilateral discussion between Prime Minister Hun Sen and Swedish Prime Minister Stefan Lofven on Wednesday in Davos, Switzerland, where World Economic Forum (WEF) 2017 being held.

The premier requested Sweden to establish an embassy in Cambodia in order to expand trade and economy; to import more rice from Cambodia and encourage more Swedish investors to invest in Cambodia; and to support Cambodia’s candidacy to become non-permanent member of the United Nation Security Council, according to Prime Minister Hun Sen’s Facebook Page.

Prime Minister Hun Sen also invited Stefan Lofven to visit Cambodia during the WEF on ASEAN in May, 2017, which Cambodia is the host.

The premier thanked the government and the people of Sweden for the support since early 1980s, when Cambodia liberated from Pol Pot Regime. In return, Swedish Premier Stefan Lofven thanked Prime Minister Hun Sen and the Cambodian government for supporting his initiatives and Swedish government on Social-level Conversation and Global Deal Initiative (GDI), an initiative to address the challenges in the global labour market and enabling all people to benefit from globalization. Currently, more and more countries are supporting GDI.

The bilateral discussion also highlighted bilateral and multilateral cooperation in resolving regional and global issues, and refugee issue in Asia and Europe.