Prime Minister Hun Sen: The Opposition Party Does Not Do Anything for the Workers 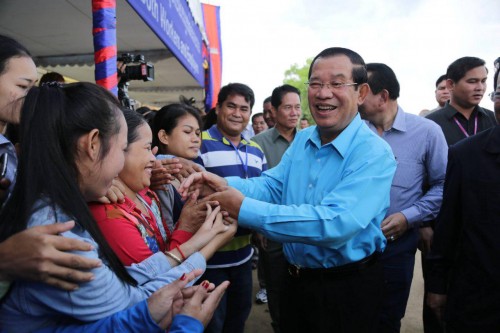 Prime Minister Hun Sen criticized the opposition party for not doing anything to help workers, but they had used the “burn down to zero” policy by requesting foreigners to stop aiding and investing in Cambodia.

The statement was made when the premier visited more than 10,000 workers in Komboul on Wednesday.

“Cambodia progresses this far because we have been trying to build this country with our blood and sweat; while the opposition did nothing but trying to stop foreigners from giving aid and investing in Cambodia. This is an irresponsible act and is a betrayal of our own people,” said Prime Minister Hun Sen.

“If foreign countries follow what the opposition party wanted to do, will you all have a job or not? They protested to increase the wages for the worker, but actually it won’t help because when the managers did not have enough money to pay for workers, the factory will be forced shutdown,” he added.

The premier stated that the protest after the national election in 2013 by the opposition party was aimed to topple the government, not to demand for higher wages for workers.