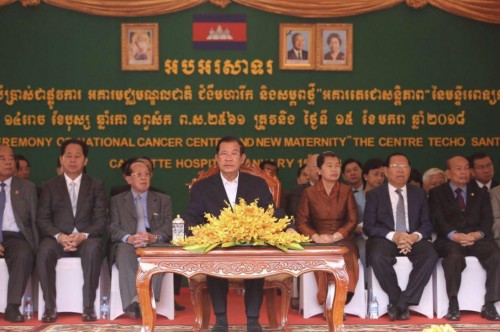 Prime Minister Hun Sen announced that he will continue to hold the position as Prime Minister of Cambodia for two more mandates until 2028.
The announcement was made when he inaugurated the new cancer treatment building in Calmatte Hospital on Monday.
The premier wants to lead Cambodia and people to become a high middle-income country and citizens in 2030.
“I am committed, as I already announced, to continue leading not less than 10 years”, the premier said adding that “I am not too old for that”.
The premier stated that the constitution of Cambodia does not stipulate the mandate of the prime minister; only the president is determined by the constitution.
He continued that the prime minister position is not voted by the citizens as well, but appointed by the national assembly and that the assembly forms the government.
By January 14, 2018, Prime Minister Hun Sen has served Cambodia for 33 years.
The premier also expressed satisfaction and pride, which under his leadership, Cambodia ended the civil war, forwarded form developing country to low middle-income country, and bettered the livelihood of Cambodian people.