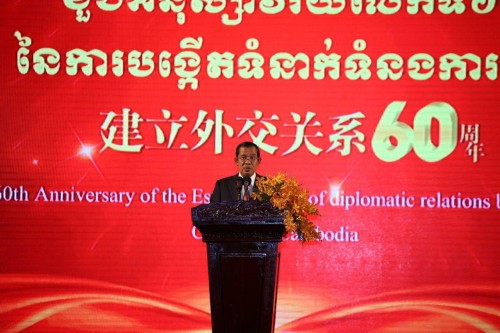 Cambodian Prime Minister Hun Sen expressed gratitude to China’s support towards the leadership in Cambodia. He regarded China’s support an important contribution to the socioeconomic development of Cambodia.

His remarks were made when he presided over the Commemoration of the 60th Anniversary of the Establishment of Cambodia-China Relations at Diamond Island Exhibition and Convention Center, Phnom Penh, on Monday.

The premier said that Cambodia-China official relations were established on 19 July 1958, three years after King Father Norodom Sihanouk met with Chinese Prime Minister Zhou Enlai in Bandung, Indonesia during a non-aligned movement conference in April 1955, and that historic friendship has been officially promoted to a comprehensive strategic partnership on 13 December 2010.

Over the past 60 years, leaders of the two countries have made every effort to maintain friendship and overcome many obstacles to lead the country and people towards prosperity and harmony.

The premier said that Cambodia appreciated the Chinese government for respecting the independence and sovereignty of the Royal Government of Cambodia for her own security and social stability; and congratulated the positive results of the fruitful cooperation.

He added that Cambodia is committed to promoting China-Cambodia comprehensive strategic cooperation to another level for further benefits of the people of the two countries.

China’s growth not only enhances the Chinese people’s lives but also contributes to the socioeconomic development of Cambodia and other countries in the region and the world.

China has launched President Xi’s One Belt One Road initiative to strengthen the partnership and promote a win-win development between the two countries and among countries in the region through cooperation in business, finance, culture and other key sectors.

Prime Minister Hun Sen believed that Cambodia-China friendship and cooperation will contribute to building a lively community for humanity as President Xi Jinping has recently mentioned.

The official visit and co-chairs of Premier Li Keqiang in the 2nd Mekong-Lancang Summit in Phnom Penh on 10-11 January 2018 is the opening of the 60th Anniversary of Cambodia-China diplomatic relations.

China is a major trading partner and investor in Cambodia. Bilateral trade volume in 2017 was $5.5 billion, an increase of 21.7% compared to 2016. By 2017, the total Chinese investment in Cambodia ranked the first compared to other countries with a total investment of $1.4 billion.

Moreover, the two countries agreed to promote trade volume to $6 billion by 2020.

For tourism, 15 aviation companies are operating regular flights between Cambodia and China. By 2017, there are about 1.2 million Chinese tourists visiting Cambodia. For the first quarter of 2018, Cambodia received a total of 1.7 million international tourists, of which over 500,000 were Chinese tourists.