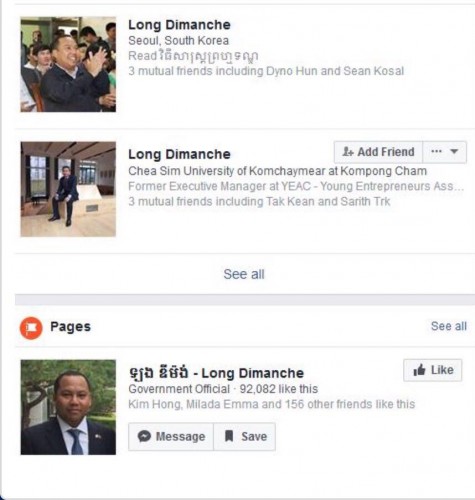 The premier believes that the Facebook page belonging to “Long Dimanche” is not that of the Korean Ambassador, Long Dimanche.

The PM voiced his suspicions during a ceremony at the Diamond Island Convention Center in Wednesday.

“I suggest that Facebook’s “Long Dimanche” immediately change the content or deactivate. This has negatively affected military honor,” said the premier.

“Posting false content regarding the deaths of the UN Peacekeepers is equivalent to declaring war with the Cambodian army. This account user needs to shut down the page or the government will take action,” he added.

The account has been content in relation to the Cambodian Peacekeeping soldiers, who were killed while on mission in the Central African Republic.

A U.N. Peacekeeper from Cambodia was shot dead during an ambush in the Central African Republic yesterday.

“We are sorry and I take this opportunity to offer condolences to our forces in Central Africa, who were attacked by the rebels, causing one death, and three gone missing that are confirmed dead,” said Prime Minister Hun Sen.