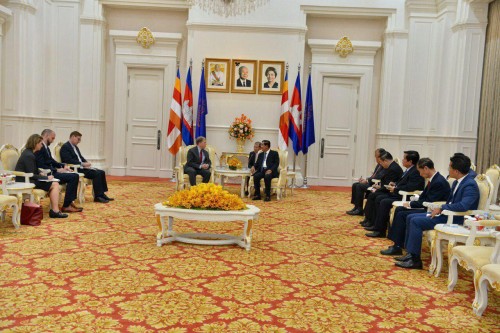 US President Donald Trump has sent an invitation letter to Cambodian Prime Minister Hun Sen to attend ASEAN-US Summit, scheduled to be held in the first semester of 2020.
US Ambassador to Cambodia W. Patrick Murphy has presented President Trump’s invitation letter to Prime Minister on Thursday at the Peace Palace Phnom Penh, according to Delegate Minister Kao Kim Hourn.
“The premier said in the meeting that he supports the US’s initiative in hosting such a special meeting in the US,” said Kim Hourn.
“Premier Hun Sen told the ambassador that as ASEAN and the United States are multifaceted, he fully supports the meeting that would serve the benefits of both sides, especially the interests of ASEAN.”
Prime Minister said he will discuss with other heads of ASEAN governments for unanimous support on the meeting.
“ASEAN-US Meeting is a great opportunity for ASEAN to continue working with the United States for mutual benefits,” Kim Hourn quoted the premier.