PM’s Speech at the Inauguration of Buddhist Religious Ceremony 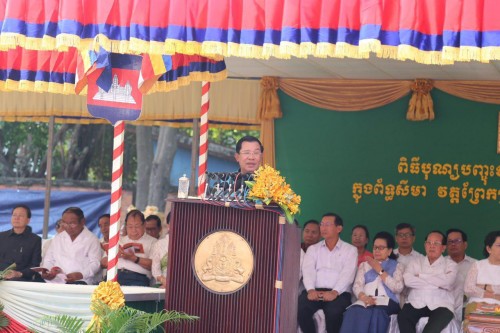 Prime Minister Hun Sen presided over the inauguration of Preak Pra’s Buddhist Religious Ceremony and other major achievements on Wednesday morning. Below are his significant remarks:

The premier emphasized that all pagodas nationwide became Lon Nol’s military camps during 1970s and were destroyed by U.S and South Vietnam’s bombs. The pagodas were also wrecked during the Pol Pot Regime. After liberation, the religion was restored and would like to thank everyone for their contributions towards promoting Buddhism. In the meantime, he requested that each pagoda create a book contains their history.

The liberation, he added, not only restored peace but also brought freedom and rights for our citizens.

The premier donated a 3-story classroom and director’s office to Preak Pra’s School and donated $50,000 for the pagoda to pay for other constructions.

The premier stated that the preservation of Buddhism was the result of the Government’s policy on supporting religion and people’s belief. It also portrayed the living standard of our people, as the monks are offered food for free.

The premier urged venerable compatriots to join the government in the anti-drug campaign. He further mentioned that capital punishment would not apply to drug traffickers, unlike the Philippines. He suggested that monks send a message for the Buddhists to avoid drugs.

The Prime Minister also requested the National Bank of Cambodia to announce that microfinance do not belong to the state. Microfinancial institutions are private and thus citizens should be urged not borrow money if they do not have the capability to return the debt.

The premier, on behalf of Cambodian citizens, urged the U.S. to consider cancelling Cambodia’s $500 million debt (interest included) accrued during Lon Nol’s regime by claiming that the U.S, as a world superpower, was responsible for backing the overthrow of King Norodom Sihanouk, which led to Civil War and Genocidal Regime. He also requested the assistance from the opposition party to support this initiative.