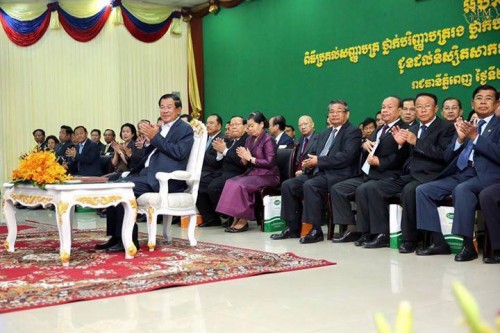 Prime Minister Samdech Akka Moha Sena Padei Techo Hun Sen has expressed his congratulations on the success of Angkor Sangkranta 2017, organised from April 14-16.
Addressing here this morning to the graduation ceremony of 1,885 students of Asia Europe University, Samdech Techo Hun Sen noted the organisation of Angkor Sangkranta in different places, besides Siem Reap cultural province this year, but next year, he said, it should be held in the provinces and capital city throughout the country.
This year, the 5th Angkor Sangkranta in Siem Reap, home to the famous Angkor Wat Temple, attracted more than 1,631,000 million national and foreign tourists, a 23 percent year-on-year increase, generating a total income of about US$95 million.
Angkor Sangkranta is an intangible cultural event organised on the land of tangible heritage.
This annual event has been included in the Visit ASEAN@50 to commemorate the 50th anniversary of ASEAN and embrace ASEAN as a single and united tourism destination, and recognised as a key cultural tourism event in ASEAN.