PM Thanks Former Opposition Leader for His Donation 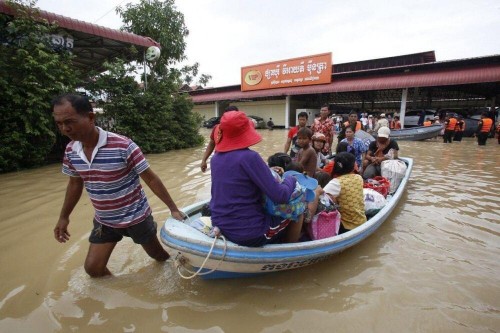 Prime Minister Samdech Akka Moha Sena Padei Techo Hun Sen has thanked former opposition leader Kem Sokha for his donation in response to the Premier’s fund raising campaign.
“On behalf of the Royal Government and the people of Cambodia, I would like to express my sincere thanks to Your Excellency and Lok Chumteav for your donation of US$5,000 to relieve the hardships caused by the current flash floods,” he said in today’s message to H.E. Kem Sokha.
“I always feel proud of the kindness and solidarity of our compatriots in times of emergency,” the Premier underlined.
As of this morning, at 10:53 am, the total funds raised to assist the ongoing flood-affected victims rose to US$6,528,049 million and 204,400,000 Riel, including the donation of H.E. Kem Sokha.
The National Committee for Disaster Management (NCDM) this morning reported that the ongoing flash floods have so far killed 18 people, including 8 children.
From Sept. 1 to the morning of Oct. 16, 2020, the flash floods have affected 71 cities/districts/Khan and 283 communes/Sangkat in 19 of the 25 provinces and capital city – Phnom Penh, Pursat, Pailin, Banteay Meanchey, Battambang, Svay Rieng, Oddar Meanchey, Siem Reap, Takeo, Kampong Speu, Mondulkiri, Preah Sihanouk, Koh Kong, Preah Vihear, Stung Treng, Kampong Cham, Kandal, Kampong Chhnang, and Kampong Thom.
A total of 53,169 families or 212,676 people have been affected, of them 6,298 families or 25,192 people have been evacuated to the safety grounds, it added.
Besides, 51,133 houses, 439 schools, 137,160 hectares of rice fields, 67,490 hectares of subsidiary crops, and many roads, bridges, canals have been flooded and damaged.