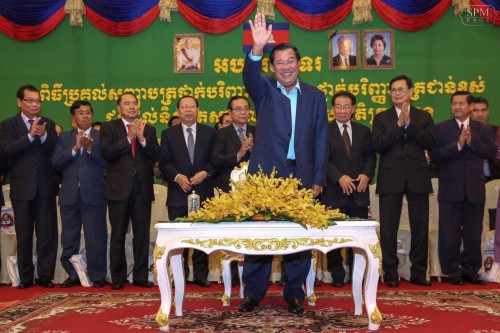 Cambodian Prime Minister Samdech Akka Moha Sena Padei Techo Hun Sen has voiced his support to the initiative to amend the Law on Political Parties.
Speaking at a graduation ceremony of the National University of Management (NUM), held at Koh Pich Convention and Exhibition Centre, Phnom Penh this morning, Samdech Techo Hun Sen said this law should be amended as it has been elaborated since the 1990s.
The premier requested the legal experts of the Office of the Council of Ministers to work on this amendment and suggested them to consider Thailand’s Political Party Law as a model.
In Thailand, when the leader of a political party committed any serious offence, that political party must be dissolved, while the political rights of its steering committee members are suspended for five years, he underlined.
Currently, there are so many political parties registered at the Ministry of Interior, but some of them have only the president and vice presidents, he added.
Under the existing Cambodian Political Party Law, all the political parties need to collect their supporters’ fingerprints, but most of them cannot find enough, therefore we should check this point in order to make their request to run a political party null and void for a three- or six-month period, he said.
According to Samdech Techo Hun Sen, foreign fund is another point to be considered so that foreign countries cannot interfere in Cambodia’s political affairs. Under the existing law, he explained, any political party violating this point has to pay a fine of 20 million Riel (about US$5,000). Some political parties have received foreign funds of up to US$2 million to US$3 million, so they are not scared of paying the fine.
The Law on Political Party of Cambodia was adopted on Oct. 28, 1997, during the 8th session of the first legislature of National Assembly. This law is composed of 11 chapters and 45 articles.