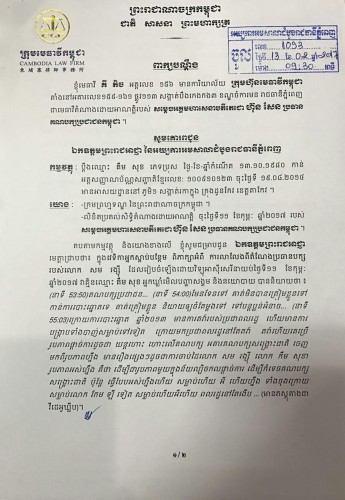 “I filed a lawsuit against Kem Sok, demanding $500,000 and requested the authorities to ensure he is not going to escape,” stated the premier Monday morning during the inauguration of Koh Thom Bridge in Kandal province, approximately 57km south of Phnom Penh.

Kem Sok, speaking on Radio Free Asia Saturday night, stated that: “After the 2013 election, Cambodian citizens were not satisfied with the result and that they were repressed and shot dead; shook hands with the CNRP president and vice president; and lastly, murdered Kem Ley. It seems that law is the only remaining method they have.”

The lawsuit was already submitted to Phnom Penh Municipal Court on Monday morning, according to Ky Tech.