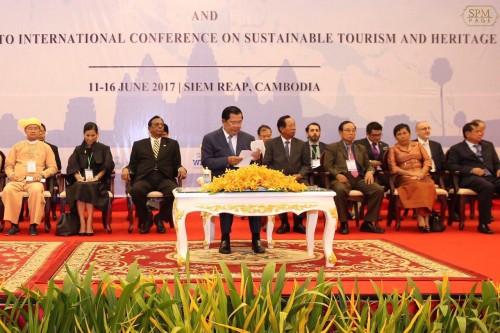 PM Hun Sen presided over the first International Conference on Sustainable Tourism and Heritage under the theme of “Conserving and Preserving Urban Heritage.”

The conference also included the 2nd Asian Cooperation Dialogue at the Sokha Hotel in Siem Reap.

During the conference, the premier acknowledged that the tourism sector is a combination of both economic and social sectors and has the capacity to stimulate living standards.

The premier emphasized that Cambodia’s focus on tourism has resulted in visits from 5 million international tourists.

Within the first 3 months of 2017, Cambodia received 1.5 million international visitors- an increase of 11.9 percent.

It is projected that between 5.4 million and 7 million tourist will visit the kingdom in 2020.

The premier also proposed a development plan for the capital, which creates clear legal boundaries for historic conservation.

“During the process, many houses in Phnom Penh will be saved and preserved in order to prevent citizens from protesting”, stated PM.