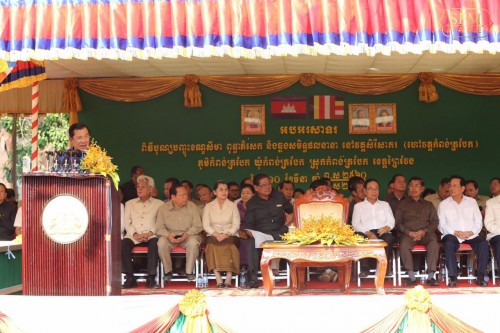 Prime Minister Hun Sen claimed that he will send Cambodian officials to Myanmar to discuss policies that Cambodia can successfully implement.

The remark was made Friday morning during the groundbreaking ceremony of a pagoda in Prey Veng, approximately 100km southeast of Phnom Penh.

The premier was responding to a request from Myanmar’s senior military commander, Min Aung Hlaing, during his recent visit to Cambodia.

“We shared our experience with the successful implementation of policies regarding peaceful resolution so that Myanmar can follow us,” the premier stated, adding that “We have also advised Nepal regarding peaceful transitions after elections.”

“Sri Lanka unsuccessfully sent armed forces to suppress Tamil militant groups. That was not an ideal situation.” said the premier.

“In the Philippines, they divided Mindanao Island; the jihadists joined ISIS to fight Germany; but in Cambodia, once a war-torn country, we’ve had the opportunity to build peace,” he added.

Cambodia has gone through three decades of war after the overthrown of King Norodom Sihanouk on April 17, 1975 by Gen. Lon Nol. The Khmer Rouge regime also murdered millions of people. After liberation, the country underwent a civil war and division.

Even after the Paris Peace Agreement, signed on Oct. 23, 1991, Cambodia remained divided. Unity and peace weren’t achieved until 1996, when the policies of the Prime Minister were enacted.