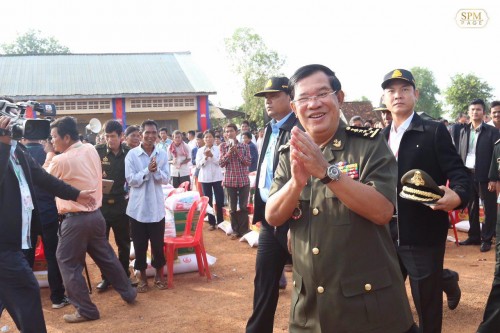 Cambodia’s Prime Minister Samdech Akka Moha Sena Padei Techo Hun Sen has reaffirmed his strong commitment to defend peace, monarchy, constitution and the legal government and be against anyone who intends to destroy them.
Addressing at the commemoration ceremony of the 40th anniversary of the process to overthrow the Pol Pot genocide regime (Khmer Rouge regime) held this morning at Koh Thmar in Tunloung commune, Memut district, Thbong Khmum province, Samdech Techo Hun Sen said the Royal Cambodian Armed Forces (RCAF) have to be ready for this obligation.
“Anyone who intends to destroy peace, create Colour Revolution has to be destroyed. RCAF needs to protect the King, constitution, and legal government,” he underlined. “Peace is not easy to be built, so we have to maintain it together.”
Regarding a rumor over the “list of those who are to be destroyed”, Samdech Techo Hun Sen explained that those who have no intention to destroy peace, their names are not on the list, but if they declare to seize power through Colour Revolution, they will be on the list.
At the same time, Samdech Techo Hun Sen recalled his experience during that period to the public and foreign ambassadors.
The premier also shared yesterday on his official Facebook page some historical events on June 20-22, 1977 when he and some of his colleagues fled Cambodia to Vietnam, before returning to his homeland to liberate the people from the genocide.