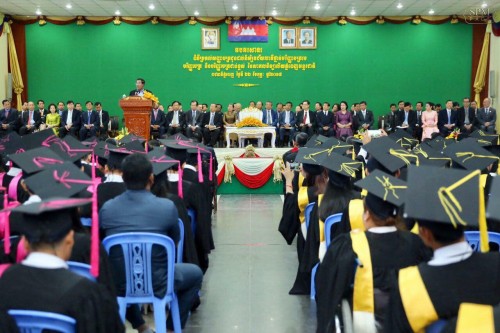 Cambodian Prime Minister Samdech Akka Moha Sena Padei Techo Hun Sen expressed his strong reaction against some foreign comments on the recent amendments to the Political Party Law.
“No one loves the Khmers more than the Khmers themselves,” said Samdech Techo Hun Sen at the graduation ceremony of Phnom Penh International University held here yesterday.
The Cambodian premier also called on foreign countries not to interfere in the internal affairs of Cambodia. “Even though we need your assistance, to do trade and cooperate with you, we never interfere in your internal affairs. So, you too, don’t interfere in our internal affairs,” he said.
Cambodia is a small country, but Cambodia has her independence and sovereignty, he underlined.
Samdech Techo Hun Sen went on to say that the National Assembly (NA) of Cambodia approved a law is not to kill its own people or to break up the nation, but for the national unity.
On Monday, 66 lawmakers, who were present at the NA’s extraordinary session, approved for the proposed amendment of the Political Party Law adopted since Oct. 28, 1997.