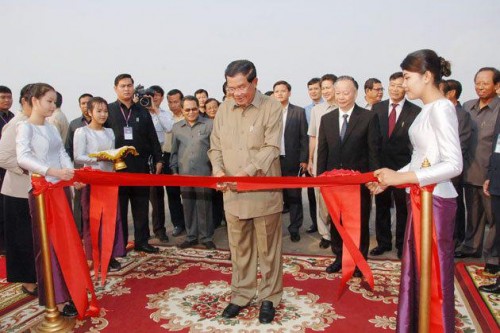 Cambodian Prime Minister Samdech Akka Moha Sena Padei Techo Hun Sen presided over here this morning the groundbreaking ceremony for the construction of the second portion and the inauguration ceremony of the first portion of the capital city’s second ring road.
Samdech Techo Hun Sen expressed his high appreciation to this new achievement of the Royal Government of Cambodia, stressing that it will contribute to the social and economic development of the country.
According to the report of the Ministry of Public Works and Transport, the first portion of the ring road has some 10.20 kilometres in length, from Kab Srov area to Russian Federation Blvd. while the second portion is about 16.67 kilometre long, from Russian Federation Blvd. to Prek Ho in Takhmao town, Kandal province.
The construction of the two portions of the capital city’s second ring road cost in total more than US$70 million.