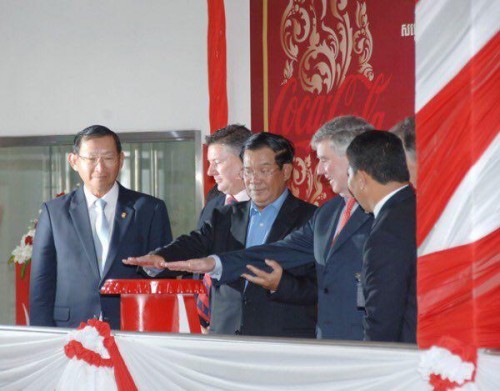 Samdech Akka Moha Sena Padei Techo Hun Sen, Prime Minister of the Kingdom of Cambodia, inaugurated here this morning the Cambodia Beverage Company Plant Coca-Cola worth US$100 million in Phnom Penh Special Economic Zone.
On the occasion, Samdech Techo Hun Sen congratulated Cambodia Beverage Company on its new achievement, and highly appreciated the company for hiring a lot of local workers.
Cambodian workers constitute about 99.7 percent of the company’s workforce, this is a big encouragement, underlined the Cambodian premier. “I suggest [the company] to continue this good performance. I feel so proud that Cambodian people are capable of working with new high technology,” he added.
Samdech Techo Hun Sen also urged the company to further expand its market not only for the 15 million people in the country, but also for the over 600 million people in ASEAN.
Cambodia Beverage Company began its operation in 1993 with only US$10 million investment capital. With about 100 workers, the company produced only Coca-Cola and Fanta for local market. Thanks to the current Cambodia’s economic potential, the company has decided to invest US$100 million in the construction of a new plant on an area of 12 hectares, including 16,000 square meters for production and administration buildings as well as other necessary buildings.
This new factory can produce some 54,000 bottles and 60,000 cans per hour with a total of 817 workers, of them 116 work in the plant.
Cambodia Beverage Company markets Coca-Cola, Fanta, Sprite, Schweppes, Samurai, Minute Maid Pulpy, Minute Maid Nutriboost, Aquarius, and Dasani.