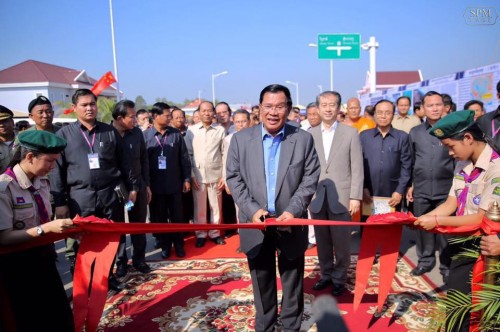 Cambodian Prime Minister Samdech Akka Moha Sena Padei Techo Hun Sen inaugurated this morning the Cambodia-China Friendship Koh Thom Bridge, in Prek Thmey commune, Koh Thom district, Kandal province.
This bridge will play a very significant role in solving the difficulties of the local people and become a key economic artery in the country, he underlined at the inauguration ceremony.
This bridge was constructed under the Framework Agreement on a Concessional Loan Agreement Provided by China to Cambodia (Koh Thom Bridge Project) between the Royal Government of Cambodia and the Government of China signed in April 2013.
The construction of this 415-meter-long and 13.5-meter-wide bridge began in March 2014 and cost some US$19.39 million.
This is a strategic infrastructure to boost trade and transportation links between the National Roads No.1 and No. 21.
Samdech Techo Hun Sen also expressed his gratitude to the Chinese government and people for their support to infrastructure development projects in Cambodia and he wished Cambodia-China relations to become stronger and stronger.