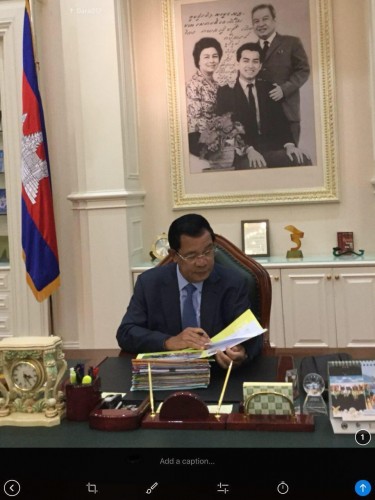 Prime Minister Hun Sen, on Wednesday, expressed his positive hope for the upcoming election despite ill-intended people’s appeals for people not to vote.

Sam Rainsy, leader of the Cambodia National Rescue Movement (CNRM), posted a message on Facebook on May 1: “THE REAL MEANING OF A FAKE ELECTION ORGANISED BY A DICTATORIAL REGIME ON 29 JULY 2018 has only two real choices: (1) – ABSTENTION means that you support the CNRP in your hearts and want this party to lead the country towards positive change; (2) – GOING TO VOTE (for whatever party) means that you support the CPP and want this party to continue to lead the country in the same way as it does now”.

“Obviously, no leaders appealed to his citizens not to vote; only those who wish to destroy the democracy and the will of the people could do so,” Prime Minister Hun Sen wrote on his Facebook on Wednesday.

Cambodia has higher percentage of voter turnout compared to that of the EU and US, according to Prime Minister Hun Sen.

The EU has only 30% of voter turnout, the US 40%, while Cambodia 69%. The result reflects the growth of real democracy in Cambodia, contrary to the elaboration of ill-intended people, the premier reiterated.

The premier again called on every Cambodian person to vote on July 29, 2018.

The registration for political parties to race in the forthcoming National Assembly 6th mandate election lasted 15 days from April 30, to May 14, 2018.