PM Hun Sen: Workers’s Incentives Increases Thanks to the Gov’t, Not the Opposition 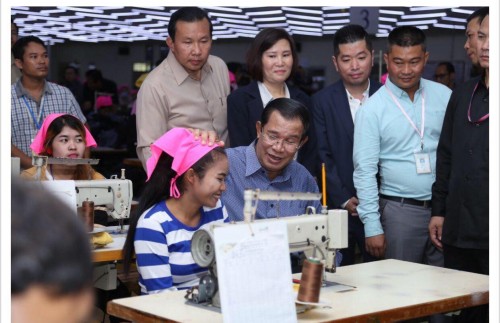 Source: FN
Prime Minister Hun Sen claimed that the increase of workers’ monthly wage in garment and footwear sectors was made by the efforts of the government, not the opposition.

The claim was made when the premier visited more than 10,000 workers at a special economic zone in Phnom Penh’s Kambol district on Wednesday.

The premier recalled that under the Royal Government of Cambodia, the minimum wage of workers increased significantly from $40 in 1997 to $153 in 2017, including other benefits amounted to $170-180.

The opposition parties only propagandize for political gain but do nothing to increase wages for the workers.

“Besides increasing wages for workers, the government also puts effort to facilitate those who work abroad. Please do not be confused that the opposition parties are the ones behind your increased wages; it is actually the government,” said Prime Minister Hun Sen.

“We continue to facilitate our workers in Thailand to have legal rights to continue to work there. We also work on creating more local jobs so that they can return to work in Cambodia,” he added.