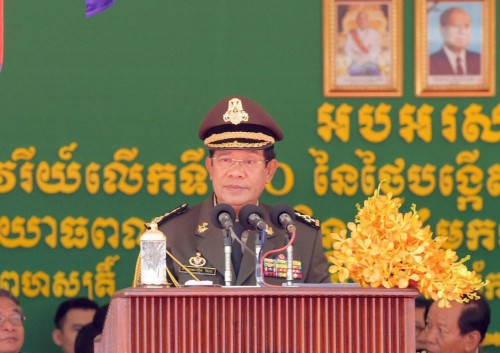 Cambodian Prime Minister Hun Sen stated that the attempts to intervene in Cambodia’s internal affairs and the issue of colour revolution require the Royal Government and the armed forces to take preventive measures on a timely manner with flexibility and accountability.
According to his congratulatory message addressed to G70 Brigade on the 25th anniversary of its establishment, which Fresh News received on Monday, Prime Minister stated that, “While Cambodia is proud of her achievements, the world is facing issues of insecurity and instability, terrorism and transnational crimes in the year 2019, which also threaten Cambodia more or less.”
Premier Hun Sen underlined that the two most important goals of the Royal Government’s defence policy are long-term peace and stability, and opportunities to develop.
“Peace, political stability, and economic growth that Cambodia currently enjoys indeed provide opportunity for capacity building of the Royal Cambodian Armed Forces,” the premier stated.