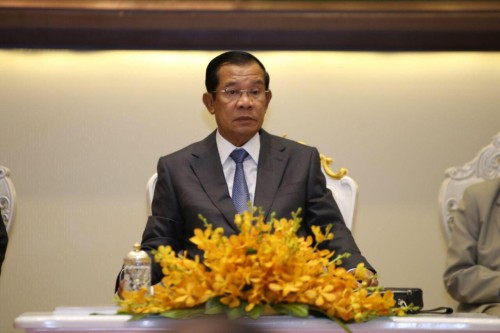 Cambodian Prime Minister Hun Sen announced that he will travel to Asia and Europe to seek market for Khmer products, addressing at the annual meeting of Ministry of Agriculture Forestry and Fisheries on Thursday.

Cambodia shall not depend solely on a single market. “We will never let anyone congest our nose. This year, I will travel to Asia and Europe to bring our products there,” the Strongman pledged, adding that: “We will expand market to the Middle East.”

According to Head of the Royal Government, back in the day, Cambodia bought everything from other countries; today, Cambodia is able to export some products.

Minister of Agriculture Veng Sakhon said that Cambodia’s agriculture sector in 2018-2019 made a remarkable improvement. Cambodia has enough food to feed 16 million people with the surplus of four million tons of rice per annum. The use of agricultural machinery for plowing rice has increased by 96% in 2018.

In 2018 Cambodia produced 16.7 million tons of agroindustry, an increase of two per cent compared to 2017, alongside the 22.4 per cent increase of aquaculture sector, according to the minister.

Head of EU Delegation to the Kingdom of Cambodia George Edgar, in late December, announced that the EU will allocate approximately EUR 87 million (about US$99 million) for the implementation of the Fisheries Program as well as the development of aquaculture in Cambodia.

“Fisheries are very important for the food security of the Cambodian people. After investing EUR 30 million in the Aquaculture sector, the EU has just approved a new EUR 87 million ‘capture fisheries’ programme to support the sustainable management of Cambodia’s fisheries sector, with a particular focus on Tonle Sap and marine resources. This new CAPFISH-Capture programme will start in 2019 till 2023,” according to EU in Cambodia.

Ambassador George said that fisheries management, as well as aquaculture, are crucial for providing nutrition and ensuring food security in Cambodia.

According to Cambodian Minister Sakhon, the budget will be used to conserve and manage fisheries resources; support and train the fishing community on conservation and to maximize their income.

USAID has financially and technically aided Cambodia’s agricultural projects as follows: (1) US$17.5 million Horticulture Project that aims to improve the connection between horticulture product buyers and suppliers in Cambodia, helping horticulture farmers improve how they grow and market their produce. The project also connects farmers and suppliers with buyers and the markets to which they will sell their products. It also improves market governance and helps create an environment that enables the horticulture market to thrive; (2) US$1 million scholarship and research grant to Royal University of Agriculture; (3) US$25 million Center of Excellence for Sustainable Agriculture Intensification and Nutrition, CESAIN; (4) US$6 million on fisheries project (2016-2021) for Siem Reap, Battambang, Kampong Thom, and Pursat province to support sustainable food security sectors in the four provinces surrounding the Tonlé Sap Lake.

The Minister of Agriculture hopes that American private sectors will invest more on Cambodian agriculture sector so that she will graduate in 2030 as a higher middle-income country.

Prime Minister Hun Sen stressed that boosting agriculture sector remains the main target of ensuring food security, nutrition, and exports. In particular, the production of agro-industrial crops in Cambodia has increased substantially thanks to international market demand and the investment in agro-industry.