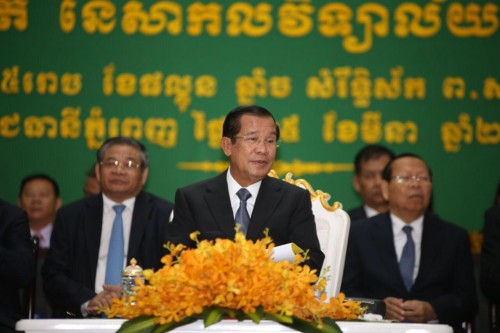 “I urge W&D to welcome back their former employees,” the Premier spoke before 1,245 graduates.

He also advised garment workers not to demand too much, as incited by some groups [CCAWDU].

Prime Minister Hun Sen urged president of the Coalition of Cambodian Apparel Workers’ Democratic Union Ath Thun to stop pushing workers to protest for the seniority indemnity as a lump sum for one year.

It was the protest with Ath Thun that led to the dismissals of 100 employees of W&D.

The amendments of the labor law stated that employers shall pay worker’s seniority indemnity every six months. The amendment aims to prevent the issue of bankrupt-and-run.

“You [Ath Thun] are demanding illegally; we could not address such concern,” the Premier stated.

Prime Minister explained that if seniority indemnity to be paid as a lump sum in a single time, employers need to spend USD 2 billion immediately.

“Employers require USD 2 billion at a single time to pay for seniority indemnity. Is it possible? Those factories will bankrupt and workers will lose jobs,” the Premier warned.

“GMAC strongly hopes that this very important and invaluable explanation [from Prime Minister] will make workers/employees understand clearly about the financial condition of factories and understand clearly about the soon-to-be implemented laws to avoid inappropriate demands incited by a handful of crafty unions and activists. This explanation promotes the spirit and confidence of workers/employees in their job, in their factory owners as well as the Royal Government,” Garment Manufacturers Association in Cambodia wrote in the letter dated early January 2019.