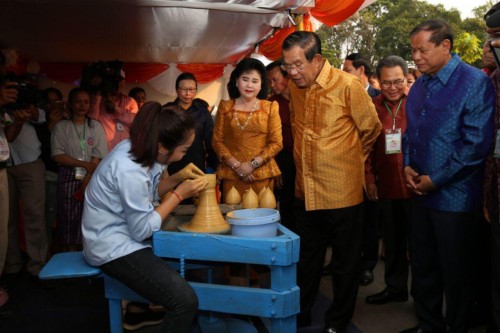 “All provinces shall use their unique attractions to mobilize tourists. In Kampong Chhnang, some places can be transformed into tourist sites,” the Premier stated.

Prime Minister Hun Sen confirmed that number of tourists in Sihanoukville province has declined, but it is a positive sign due to the emerging of new tourist sites nationwide.

According to Prime Minister, the bridge connecting the two provinces will be the longest bridge in the kingdom with a length of 3,900m crossing three rivers, including Phsar Krom, Chroy Bos, and Kompong Hau. He continued that the bridge will not affect the water traffic and fish migration.

The Premier stressed that after the roads and bridges completed, it will be cost-and-time effective for commuting. Today, if Kompong Chhnang people want to travel to Kompong Thom, ones shall travel 100km crossing Prek Kdam bridge, Kandal and Kompong Cham provinces to arrive Kompong Thom.

Prime Minister Hun Sen strongly hopes that all citizens will enjoy the new roads and bridges, as feasibility studied confirmed that there will be no impacts on natural resources, particularly fish migrations.