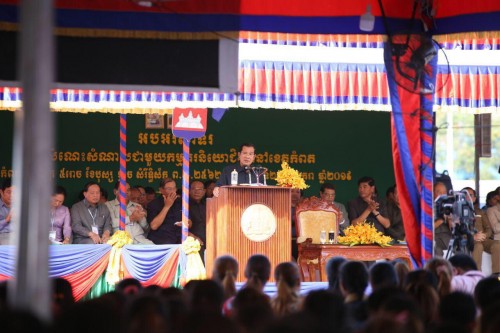 The Royal Government has lowered electricity price; delegated CAMCONTROL to customs department; and removed the Kampuchea Shipping Agency and Brokers (KAMSAB).
“Low electricity price leads to the increase of workers’ minimum wage. Other industries and people in general also benefit,” the premier stated.

According to Prime Minister, the Royal Government would lose US$30 million from the withdrawal of CAMCONTROL at the border gate, but the private sector claims that they will profit US$40 million over the US$10 million paid unofficially.

Prime Minister Hun Sen told investors to come to Cambodia for five reasons: (1) favorable business climate provided by political and macroeconomic stability; (2) the strategic location that has become “Factory of Asia” with a population of approximately 3 billion under RCEP framework; (3) young and potential labor force; 35-year-old group accounts for 72% of the total population; (4) open competitions for all without discrimination; and (5) good incentive and investment protection agreements.