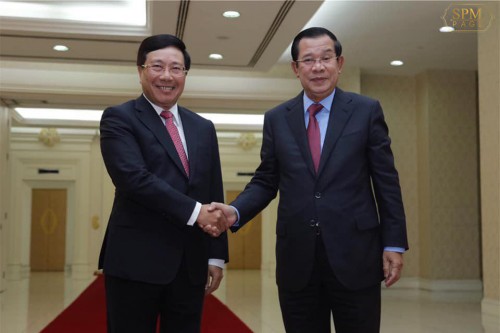 Cambodian Prime Minister Hun Sen urged Cambodia-Vietnam Joint Commission to resolve border issues and to discuss cooperation in all sectors between the two countries based on the principle of friendship and progress, according to Kao Kim Hourn, delegate minister attached to prime minister.
Prime Minister statement was made when receiving a courtesy call from Phạm Bình Minh, Minister of Foreign Affairs of the Socialist Republic of Vietnam, on Tuesday at the Peace Palace, Phnom Penh.
According to Kao Kim Hourn, the Premier encouraged the Joint Commission to promote cooperation and strengthen bilateral relations in all fields. In particular, preparations for the signing of border agreement between the two countries.
Cambodia-Vietnam share border of 1,270 km. The two sides had finished resolving 84 percent of controversial borderlines, in which 314 of 375 markers had been demarcated, while the 16 per cent left is being negotiated.
Prime Minister Hun Sen requested Vietnam to hold the Cambodia-Vietnam Business Forum on his visit to Vietnam in September to provide opportunities for Vietnamese investors to invest in Cambodia.
He also pledged to continue promoting bilateral trade volume, while current trade volume reached nearly USD 6 billion.
At the invitation of His Excellency Prak Sokhonn, Deputy Prime Minister, Minister of Foreign Affairs and International Cooperation of the Kingdom of Cambodia, His Excellency Pham Binh Minh led a delegation to Phnom Penh and co-chair with H.E. Prak Sokhonn the 17th Meeting of the Cambodia – Viet Nam Joint Commission (17th Cambodia-Viet Nam JC) for Economic, Cultural, Scientific and Technological Cooperation from 20-21 August 2019, according to foreign affairs’ press release dated Friday.
“The Cambodia–Viet Nam JC meeting has been held regularly, aiming to update the progress of cooperation and to explore ways and means to further expand the scope and efficiency of bilateral relations between the two countries in various fields. It also gives an opportunity for both parties to exchange their views on cooperation of mutual interest in the regional and international frameworks.”
“This 17th Cambodia-Viet Nam JC Meeting will further enhance the long-lasting fraternal ties and good neighborliness between the two countries as well as making contribution to peace and prosperity in the region and beyond,” it added.