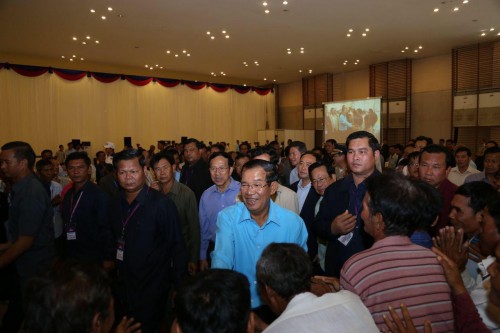 During the meeting with 300 tri-cyclists on Saturday at Koh Pich, Prime Minister Hun Sen unveiled four reasons of Tricyclists Foundation.
The premier stressed that the reason to create the foundation in January is based on his four personal historical events. First, Jan. 7 is the 39th anniversary of the liberation from Pol Pot’s Regime.
Secondly, Jan. 5 is the 42nd of anniversary of the premier’s marriage.
Thirdly, Jan. 8 is the 39th anniversary of becoming the youngest of foreign minister in the world.
Lastly, Jan. 14 is the 33rd anniversary of becoming the Prime Minister of Cambodia.
According to the Prime Minister, the foundation will spend $240,000 to $300,000 annually. The premier decided to allocate $140,000 for the first phase and will donate $20,000 monthly.
“The creation of Tricyclist Foundation will help support the livelihood of the tricyclist as well as conserve the tricycle which is the Khmer identity” the premier said.
He emphasized that those who join the foundation, will receive free access to health treatment at public hospital and 7,000 riels (nearly $2) per day, which will be provided every 10 days.
Besides, there are some other donations such as clothes and money during national ceremony as well.
Meanwhile, the premier rejected any comments which accused him for trying to control tricyclists through the creation of the foundation.
“I need to make clarification to avoid any confusion from commentator or person who likes to criticize others… in Cambodia, there are two tricyclist associations, besides these, some tricyclists who didn’t join any associations, therefore I cannot offer money through any association. Only a small number of people benefit”, the premier continued.
The creation and implementation of Tricyclist Foundation was announced by the premier in the council ministers’ plenary session on January 13, 2018.