PM Hun Sen: Together to Improve Elderly’s Quality of Life 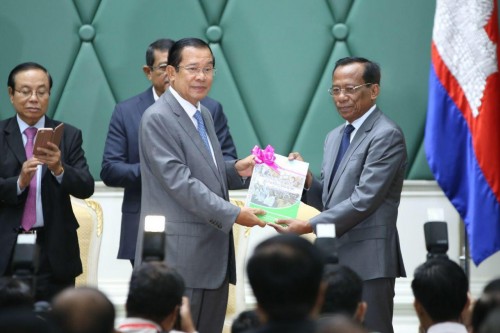 Prime Minister Hun Sen has officially launched the 2017-2030 National Ageing Policy for the purpose of improving welfare and living conditions of Cambodian ageing people.
Minister of Social Affairs, Veterans and Youth Rehabilitation Vong Saut said that the proportion of older people aged 60 and over in 2013 was 8 percent, equivalent to 1.2 million of the total population of 15 million, and is expected to grow by 11 percent, equivalent to 2 million of the total population of 18 million by 2030.
“This is a new task that Cambodia needs to take into consideration, even the elderly have not caused any serious issues to the government,” stated PM Hun Sen during the introduction of the national policy on Thursday.
“The launching of the 2017-2030 National Ageing Policy is an additional effort to improve the elderly’s quality of life, to ensure the well-being of the elderly in society, and to make Khmer society an inclusive society.
“This is the opening of a new history page of the development of a social protection system, focusing on the protection of the elderly in Cambodia that respond to their actual needs in the context of rapidly changing demographics and socio-economic development processes”, the premier added.
He hopes that the 2017-2030 National Ageing Policy will achieve the planned goals with all ministries, development partners, and stakeholders contributing significantly to make a positive difference in the quality of life and living conditions for Cambodian elderly.
On that occasion, PM Hun Sen announced the establishment of Elderly Foundation to support the survival of the elderly and he will be the chair of the foundation.