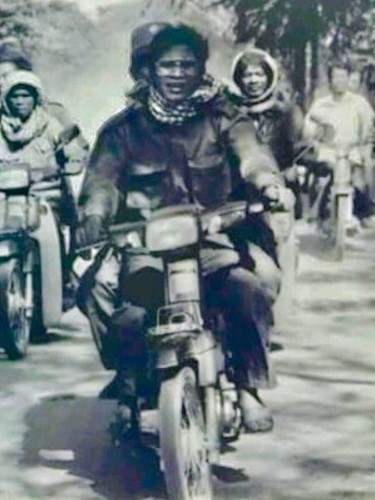 Prime Minister Hun Sen, on Tuesday, posted a photo of himself riding a motorbike and visiting people in villages to understand the suffering of the people in remote areas to promote agriculture by building wells and irrigation systems.

Prime Minister also thanked fellow people and workers who trusted his leadership and continued to support and vote for Cambodian People’s Party to maintain peace and further develop the country.

“This photo reminds me of a time that I always travel to the provinces to help people in villages and remote areas access to clean water and irrigation systems to ensure adequate rice and vegetable”, the premier wrote on his Facebook on Tuesday.

We had only motorbike to help people back then, as the road was ruined by war. Today, we have good infrastructure, which reflects better living conditions.

The premier pledged to meet with workers, as he believed that meeting with workers directly is an opportunity to learn and seek practical solutions to assist them in maintaining good working conditions, salary, and other benefits.

According to the premier, salary will be increased annually and that workers will also get the same amount of pension as the government officials.

In addition, pregnant workers will get bonus, three months rest with 120% of their salaries.