PM Hun Sen Supports the Negotiations of the Two Koreas 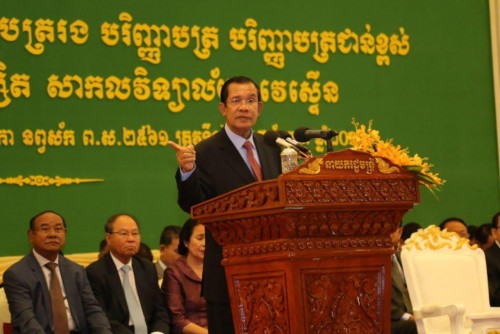 Prime Minister Hun Sen is pleasure to see the relief of the situation on the Korean peninsula, addressed to approximately 4,000 graduates of Western University on Tuesday in Phnom Penh’s Diamond Island.
On behalf of the Royal Government of Cambodia, Prime Minister Hun Sen announced Cambodia fully supported the friendly dialogues of leaders of the two Korean siblings that will lead to regional and global stability and urged other nations not to hinder the talks.
“I hope other countries will encourage South and North Koreas to reduce the tension”, said Prime Minister Hun Sen.
The premier also expressed dissatisfaction with the countries that have stirred the talks between the two Koreas.
Prime Minister stressed that the negotiation for peace between of both Koreas is the willingness of the siblings and their people who speak the same language.