PM Hun Sen: My Supporters Didn’t Sell Their Heads for $600 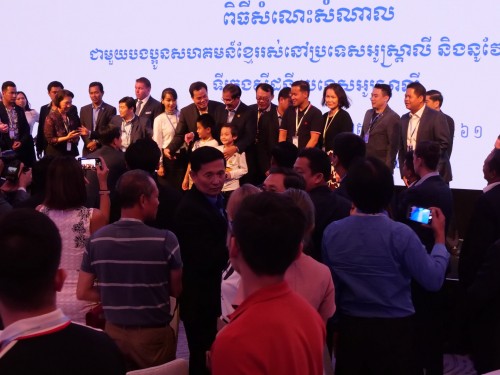 Prime Minister Hun Sen told a small opposition group that his supporters coming from Australia and New Zealand to welcome him in Sydney did not sell their heads for $600 as accused, speaking in a meeting Cambodian supporters in Sydney on Friday.
The premier also considered the opposition’s accusations as a serious insult to the Cambodian people abroad.
Prime Minister’s statement is a response to a propaganda by the opposition team for spreading news on Facebook that those who welcomed him in Sydney will receive $600.
“If they insult me, it’s fine. But why did they insult you all here. I don’t have money to give to each of you… why a person who considered himself as a hero, an educated, insulted a human being?” the premier addressed to Cambodian supporters abroad.
Prime Minister reiterated that his supporters are humans, not goods. He also considered the colorization of the opposition group as a deceitful politics, claiming that those who supported Hun Sen is a traitor and those who supported the opposition is a patriot.
Some opposition members accused others for selling heads to Prime Minister; however, even the opposition member accused their member. For instance, Thy Sovantha, former CNRP activist, was accused for selling head to the premier.